The temperature in Hamilton for this race was predicted to be -11 degrees Celsius without the wind chill, and -22 with it. I think that’s the coldest it’s ever been in the 8 prior years I’ve run this race. I’ve run it in the rain, in snow, in wind, and even in the relative warmth (at least for Canada at this time of year). Today is different, and will be an interesting challenge.

This race is the last one of my race season. My good running friends and I (this year sadly numbering only three including me) have made it a tradition to head to Hamilton and burn off some of the food we’ve eaten over the previous few days. I love this race for two reasons. Firstly, the distance is perfect. Not too short, and not too long that it would be a slog. Secondly, it’s not an easy run. The course has changed a few times since I’ve run it, and has gotten less hilly, but that makes it no less difficult. The first part is flat downhill to the Hamilton harbour, then it follows the water around and along the Waterfront Trail. There is one big uphill, followed by a big downhill, then back to the start. So an out and back, with a loop at the end. Another thing I like about this race is the 12:00pm start. After being festive for the previous days, it’s nice not to have to get up super early to eat breakfast.

This race is typically casual; by that I mean that I usually don’t run it with a goal time in mind like my other races. It’s just a nice run with friends. Now don’t get me wrong; in the past I have pushed the pace, and done very well here, IMHO. My PB is 01:21:12, but that was 9 years ago. I hope someday I come close to that time again, but it won’t be this year.

My pre-race ritual this year was uneventful. I was picked up by my friend Paul, then we went and picked up Sharon. Part of our routine is to hit Tim Hortons on the way to Hamilton for some coffees. With it being so cold this year, they were most welcome! We also laugh at all the people stuck in traffic on Highway 401 trying to get off and go to Yorkdale Mall for boxing day sales. The drive to Hamilton was uneventful; there’s usually no traffic at this time of day, other than the shoppers.

We arrived almost exactly 1 hour before race time, which is perfect. The race headquarters is at the YMCA in Hamilton on James St. We parked, made our way there, and picked up our race kits. I usually end up bumping into some of my other running friends here, and today was no exception. I spent some time chatting with them about the holidays, kids, race goals, etc. Then it was time to figure out what I was going to wear for the race. 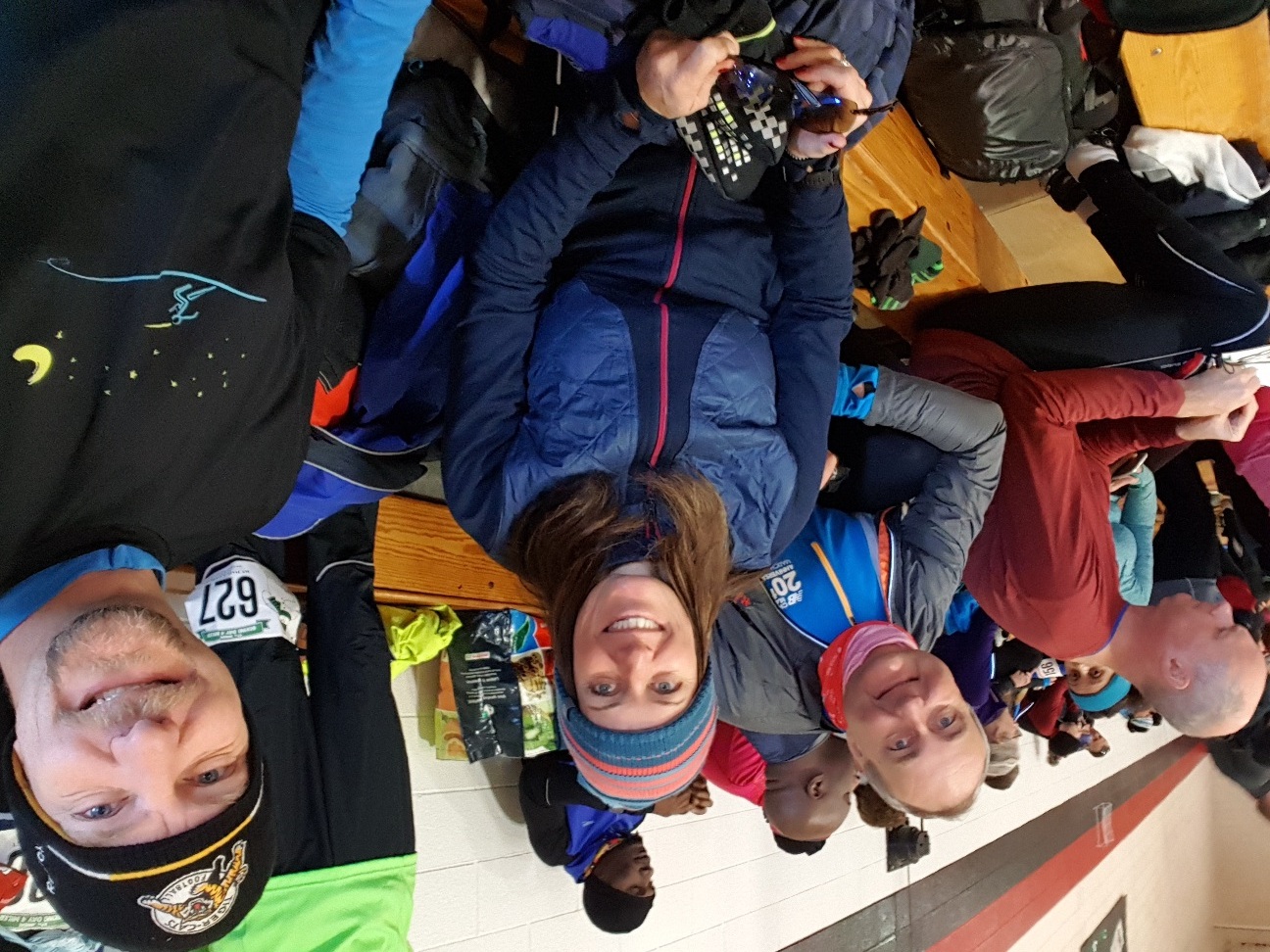 You can tell this is the before pic, we look so happy.

When it’s this cold, I typically layer up. I had a tech long sleeve, with a tech short sleeve over top, then my winter running top. It’s super-warm, and normally would be enough. Today, however, I was worried about the wind. When it’s windy, I add a thin windbreaker jacket over it all. I don’t like to do it, because I usually end up being very hot, as the jacket isn’t all that breathable, but I’d rather be too warm than too cold. Wind always worries me. On the bottom I wore my old faithful Pearl Izumi winter tights. (I’m so sad that Pearl Izumi got out of the running gear business, their stuff was so good!) Rounding out my outfit were my super-warm running mitts (they look like oven mitts but are super warm; I’ve worn them in -42 in Regina and my hands were NOT cold!), face shield, and my Hamilton TigerCats toque. Gotta rep the home team when in the Hammer!.

Eventually it was time to head down to the start. This always takes the longest time because the doors from the YMCA are small, and there’s really only one set to go out of to get to the start. We were actually walking to the start when we heard the race director start! Quickly we ran to the corral, over the timing mats, and started.

The first 2km of the race is always a big crush; you really need to wait until people start to spread out before you can get into your pace. Added to this was the fact that the roads were still snow covered, and despite the street being blocked off by cars, there were parked cars on it. This made it very narrow in spots. Not much to do here other than just manage until you get to the waterfront, where it opens up.

At 2km I was running between 5:30 and 5:45 min/km pace, and it was comfortable. If I could hold that for the whole thing, I’d be happy. The waterfront trail was sort of clean, but there were slippery and snowy parts due to the blowing wind. And it was fierce here along the water! Luckily we were not running straight into it for very long, and it actually did help out a bit when it came from the rear.

I cruised along like this until the 7km mark. The course isn’t hilly except for the big hill at the loop at the end, but there are some small rollers here and there. At 7km I hit the bottom of said hill, and took a walk break. My upper back was starting to ache due to my running posture. It’s been a constant problem for me during races this year, and it’s something I really need to correct. From what I can tell, I end up looking downwards when I run, just in front of my feet. This causes my upper back to get sore. I also tense up as I get tired, which puts strain on my shoulders. All this means that my back ends up being on fire, and causing me to slow down, eventually to walk. It happened in the Scotiabank Marathon I ran this year, and it was happening now.

So as my back started to ache, I also felt real tired. So I took my first walk break. I walked for around 200m then started running again. The hill actually wasn’t all that bad this time around (yay strength training!) I took another walk break at the 9.5km mark, just on the way down the hill. I was getting real tired, and needed to catch my breath. At this point, the wind was full in my face, and that also caused me to look downwards, which made my back hurt more, which meant a walk 500m later (10km). I knew where this was going. Things were going to deteriorate physically and mentally for me, such that I’d be walking a lot more.

My friend Paul caught up with me just after the 10km mark and we ran together for a bit. At 12km I needed to walk again, and he went on ahead. I walked to the water station and grabbed a cup of Gatorade (it was a sno-cone on account of how cold it was), downed some of that, and carried on. At this point, my pace had slowed to 6:00 min/km, and I was just focusing on getting to the finish. I was also starting to get down on myself for being such a wimp and walking.

Eventually the end was in sight, and I trudged across the finish in a time of 01:38:23. Not a particularly great time, but I finished it, back screaming and all. I met up with the rest of the crew in the YMCA for post race tomato soup and food (I’d actually been dreaming of the soup for the last 2km of the race).

Overall it was a good race, although I wish I’d performed better, and not cracked under the pressure. I had no issues with my feet or legs, and felt pretty strong. Not the greatest way to finish out the 2017 race calendar, but I can only look to improving my times from here out.