(This blog entry has both stage 4 and 5 in them. I was lazy in my day off, and didn’t manage to get the entry finished. Sorry!)

The one thing that I really appreciate about being a runner is the incredible friendships and camaraderie that we, as runners, share. Although it will always be a cutthroat competition for every spot on every team, our companionship transcends these competitive rivalries. – Jen Rhines

This stage is a bit odd in comparison to the other stages, mainly because it starts at 6:00pm. The idea was to give us some extra recovery time (not having to get up early), but the downside is that it makes fuelling properly a bit difficult. Most runners have their fuelling down to a science… because normally runs start in the morning. But how do you prepare for an evening run? When do you eat? How much do you eat? You want to eat early enough before hand but also take advantage of the rest time to relax. In any case, I opted to go out and have a larger breakfast (with a snack around the 2:00pm mark) and sort-of skip lunch. Dinner would come after the race was over.

This stage is also known for it’s hills, and there’s plenty of them. In total, there are 20, and some of them are HUGE. One of them is called “Horror Hill”. To give you an idea of what I’m up against, check out the elevation map below.

Yeah, I know. BRUTAL. It also starts, and ends, on a steep hill. GREAT.

This is the start of the “Mountain” stages, and I knew it was going to be awful on my knee and IT band. Based on the way it felt yesterday in Stage 3, I may be in trouble here. All I could hope was that all the rolling on the foam roller, using “The Stick”, putting some Traumeel cream on my knee, and the Advil would work it’s magic and I’d have a fighting chance on getting through it.

We arrived about 45 minutes before race time, and I did my usual pre-race ritual (warm up jog of about 5 minutes, last bathroom break, downed a gel with some water). Soon it was race time, and Lloyd marched us all down to the start. We actually start the race on the uphill of the road we have to run up to finish. It’s the only race I’ve ever done which starts and ends on a steep uphill incline. With his customary “On your mark… GO!” We were off and running.

As has happened every stage, my knee started protesting right off the bat, and continued to protest for the next 2-3km. It was joined by other muscles from the waist down that were overworked and underutilized. The first few kms are a miserable bunch, and I was happy to spend them chatting with the runners around me; taking my mind off my sore and tired legs. 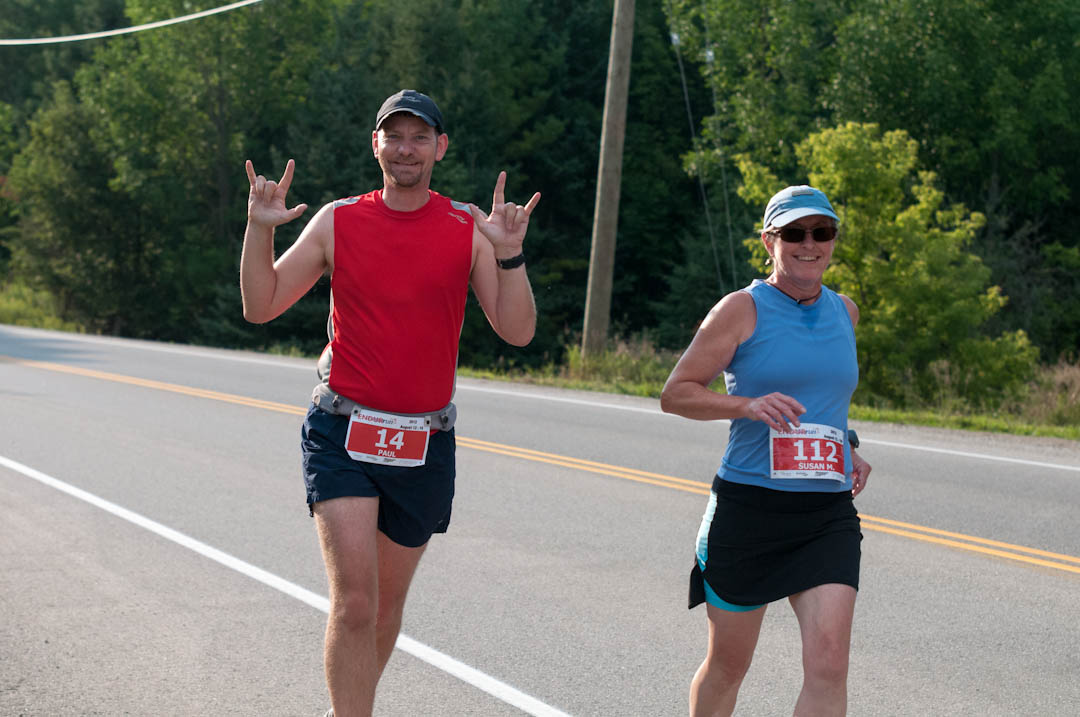 At the 4 km mark, we head down Wilmot Line, and begin the real hilly part of the course. At this point, the knee was starting to settle down. Despite that, I walked up some of the steep hills, including “Horror Hill”. I didn’t want to take any chances, with so much racing left in the week. Once I hit the 6km mark, the pain in my knee all but disappeared! I kept waiting and waiting for it to start up, but it never did. The turn-around point was at 9km, and at that spot, I ran up ALL the hills on the way to the finish! The joy in not having to hobble or limp along was so good, and I was feeling awesome all the way back. Guess the rolling and stretching and resting I did earlier in the day paid off in spades!

I finished in a decent time; probably slower than last year, but it was strong right through to the finish. This was the BEST run by far of the whole week! All that worrying was really for nothing, but we’ll see how things shape up for what is undoubtedly the hardest stage, Stage 5.

This stage should be renamed to “Cross-Mountain”, because that’s really what it is. It takes place at the Chicopee Ski area, and involves running up and down the ski hill 4 times per loop, and doing 5 loops, for a total of 25.6km. As one ENDURrunner said, this race has no freebies. This is where your training (or lack thereof) will show through in spades, especially hill and strength training. In other words, it is going to kick my butt big-time.

The stage also includes some flat-ish trail runs, as well as some trails on the back side of the mountain. The worst parts of the 5.1km loop is where you go up the access road at the back (approximately at 1.5km), and up the front face (between 3.5 and 4km). For me, these are parts I will be walking. I know already not to attempt to run them. Before the week started, I’d hoped to run all the hills at least once, with the exception of the steep front face. But with the way my knee and IT band have been, conservative was the attitude I was going to take.

This stage also starts what is called the “Sport” competition. What I am doing is the “Ultimate”, all 7 stages. You can also sign up for just stages 5, 6, and 7, which is the Sport. As such, we had a number of new people join in the fun, some who had done past ENDURruns, or individual stages. It was great to see so many familiar faces again, and reconnect with them. (Savvas, Costas, and Steve, I’m talking about YOU guys!)

I don’t usually wear anything special when I race; just whatever sleeveless shirt and shorts is clean, but today had a bit of a special meaning. Today I wore my Flying Fartlek t-shirt in honour of my friend and running buddy Jim Simpson, who is struggling with a rare form of cancer. He’s currently undergoing intense chemo to try and slow down the disease. He has run this stage the last two years as part of the MyVO2 team, and even broke his toe on a root in the first year. I thought about him today, and it helped me deal with the pain I was feeling throughout the week. 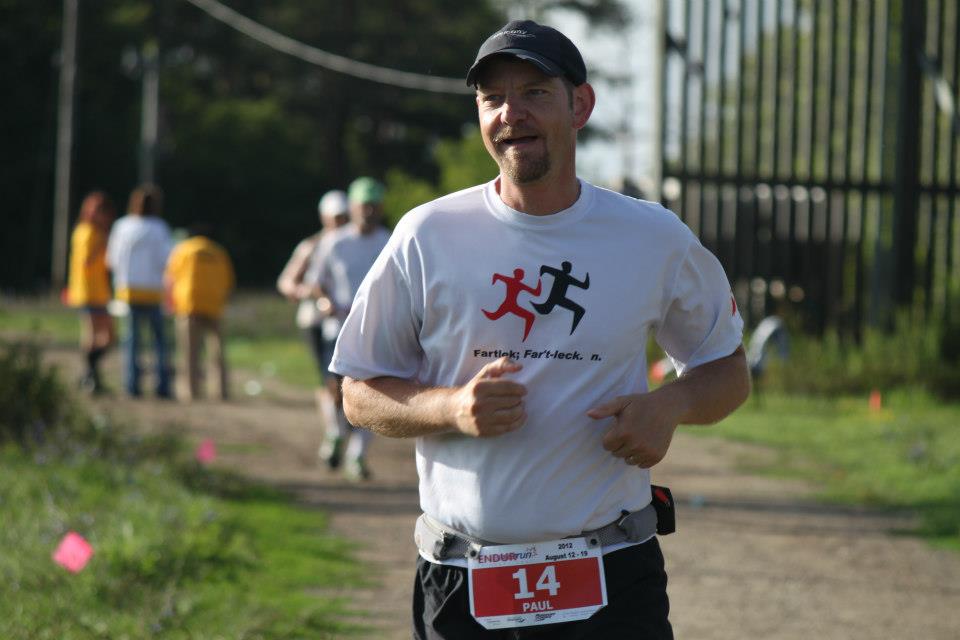 As I started the first loop, my knee and IT band started aching. This continued for much of the first two kilometres, so much so that I was starting to think that I may have to drop out. Plus, I was getting a new pain under the ball of my right foot (the other side), which felt like plantar fasciitis, or as much as I’d been told how it feels. GREAT. I tried to stay positive, and stick to the plan of walking when necessary (but not wimping out and walking too much), and to continue to move forward, whatever happens. Walking up the access road to the peak seemed to take an hour by itself. But soldier on I did. I was in good company, as many of my fellow runners were feeling pain, and were going slower than I’d seen them run earlier in the week. 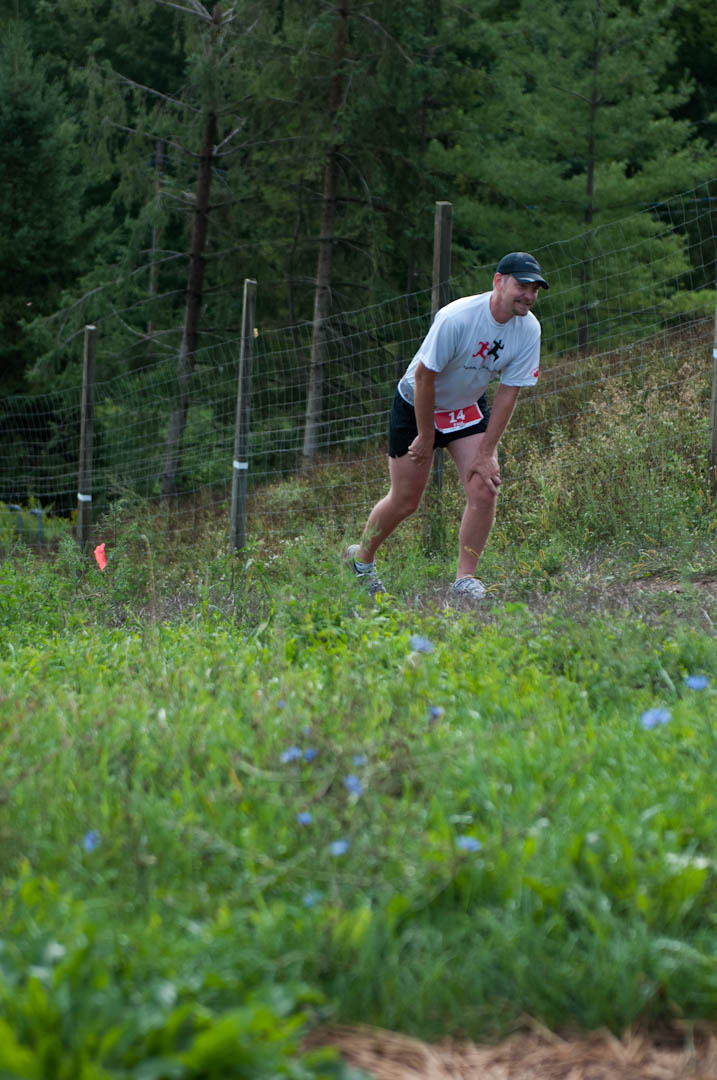 I’ve said before that these looped runs do a number on the brain. It really is partially a head-game; not to get discouraged knowing that you’ve got X more loops of the same thing to do. For me, trying to stay positive was difficult.

My normal 5km time is between 25 and 30 minutes, so I figured that each loop here would take me between 40 and 45 minutes to complete. That also meant that I should take a gel in each loop, and I decided to do it at the top of the first ascent. The volunteers were amazing, always cheerful and happy to see you, and most of them knew my name by now (it is also on my bib). It really helps when they yell out “Looking good Paul, keep it going!”

Last year, one of the other ENDURrunners (Bill) and I ended up together at the end of the race, and we sprinted for the finish. It made for great photos, and a fun “Duel in the Sun” ENDURrun style. This year, we ran most of the course together, leap frogging once or twice, but even though we were both struggling, I ended up taking the lead in the 4th loop for good. The aches and pains slowed down to a dull ache by the 3rd loop, and I just concentrated on getting it done.

One other difficulty I had was that I forgot my GPS watch back at the residence. This was the first race I ran without the watch to refer to. I usually look for distance travelled, and also my lap speed to see how slow (or fast, but usually slow) I was going. It also helped me pace via gels. Without it, I really had no idea where I was, and could only relate as I completed each loop, as there was a big clock at the finish that recorded the elapsed time. I found myself constantly looking at where my watch should have been.

I finished the race strong and relatively happy, which is really my goal for the whole week.