Beyond the very extreme of fatigue and distress, we may find amounts of ease and power we never dreamed ourselves to own; sources of strength never taxed at all because we never push through the obstruction” – William James

Today’s stage is slightly different than the other stages, in that it is a time trial. What does that mean? All the runners are ranked in reverse order based on their finishing times from Stage 1. So the last runners in yesterday, go first today. Each runner starts 1 minute after the next one in the list. The object in a time trial, is to catch the person in front of you. It also has some other benefits. Everyone more or less finishes at closer to the same time. It also allows you to see (and cheer on) the faster runners, and gives your spirit a boost, as the slower runners (aka ME) are leading the pack, or able to pass the people in front.

In past years this stage was run in Cambridge, the city to the south of Kitchener. The route started in Riverside Park, went up a very steep hill, over the 401, then along some gradual hilly roads, then along a wooded trail, back to the park. Very scenic. Due to construction along the route, plus general bad attitude by the City of Cambridge, Lloyd had to move the route somewhere else, and chose to do an out and back from his house in Conestogo, just north of Waterloo. In his opinion, the new course is more of what a time trial should be; flat and fairly straight, so you can see the people in front of you that you need to catch. I like the route from his house, mainly because he’s got a beautiful salt water pool to swim in after the race is done. 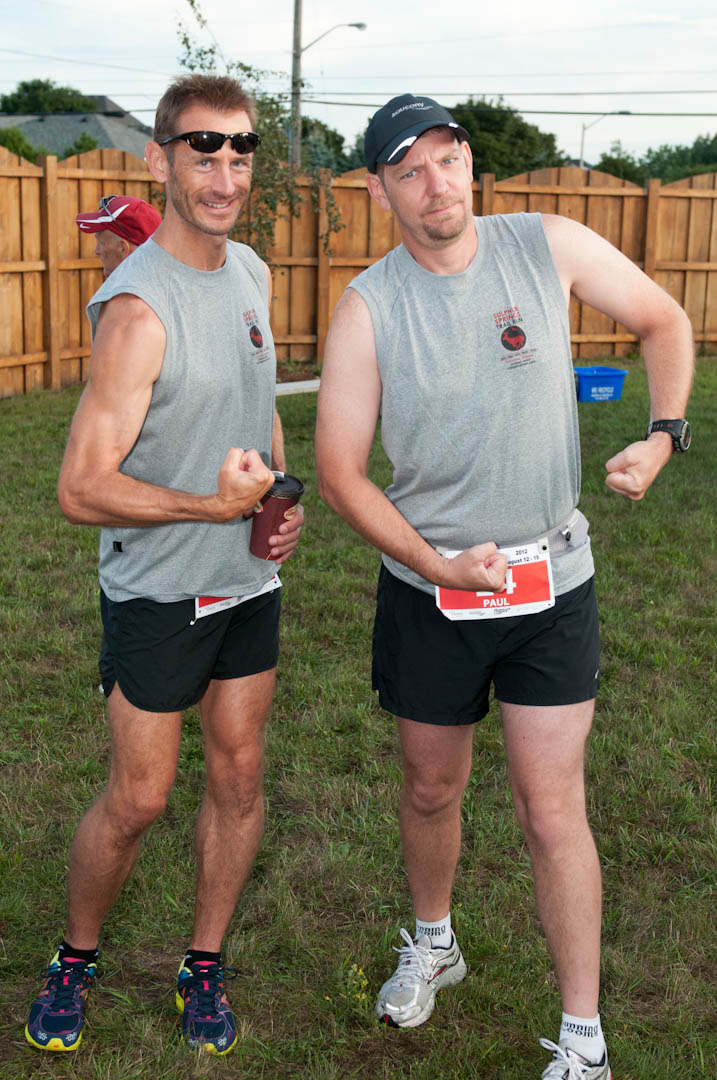 Me and Dave R. dressed like twins and showing off our “pipes”. Well, at least he’s showing his off.
Photo by Julie Schmidt

Sleep last night was terrible, yet again. Probably due to my 4 hour super-nap yesterday. I’ve also been having some GI issues; not sure why, as my pre-race food choices have been the same as always. Weather said cloudy, but no rain, which is good. No real change from yesterday, other than the fact I decided against having any gels on the route, after yesterday’s digestion issues. I’ll need to tackle that before Stage 3.

As usual, we got to the race start 45 minutes ahead of go time. After some nice chit-chat with my fellow tough runners, it was time to get ready. One of the newcomers to the ENDURrun, Merzi, and I went for a warm-up jog up the road and back, probably about 5 minutes worth. I was worried about the knee, and was pleased to find that it seemed to be holding up okay. No shooting pains like yesterday.

Lloyd gathered us all at the start at 8:00am, and the runners started out. Because of my relatively pedestrian time (compared to everyone else), I was up fairly soon. With a nice cheer from the crowd (we cheer pretty much everyone crazy enough to do this race), I was off and running.

I felt good off the start, and was humming along, when about 2 minutes or so in, I looked at my watch. 5:02 min/km? Yeesh, I’m not going to last if I keep that up! I guess I had to look good for the crowd at the start. :-) I slowed it down to my comfortable pace of 5:30 min/km, and tried to settle in. The warm-up helped to make my legs not feel like crap for the first few km. The sun had also come out, and was beating down on me. So much for “cloudy”. 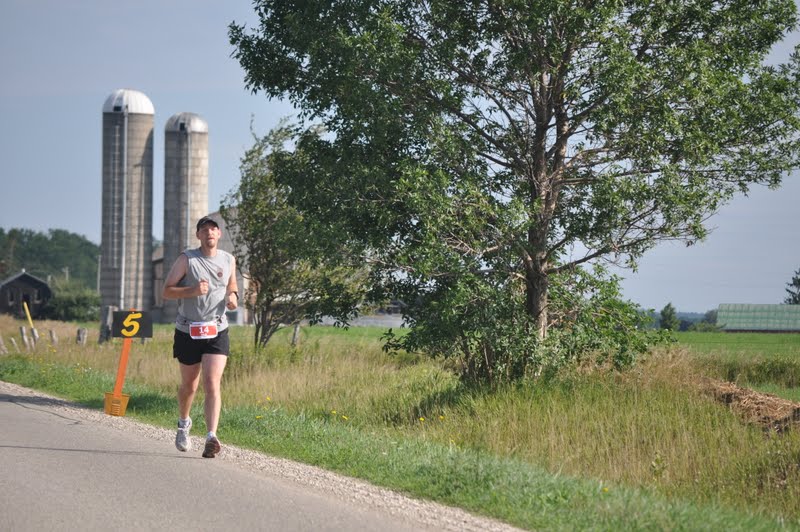 The road we started on was a long straight road, and I could see several of the runners that had started before me. I really didn’t want to force myself to run too fast and overtake anyone, knowing that there’s way more to the week to come.

Soon enough, though, the familiar stab of pain started on the side of my left knee; much sooner than yesterday. I think it was around 6km or so. I toughed it out to the first water station, where I grabbed some Gatorade and water and walked as I drank. I also tried to kick higher with my left leg while running, in the hopes of stretching the IT a little bit or at least see if that makes it worse or better. No dice. The good thing though, was that while my knee did hurt, it wasn’t getting worse. It seemed to be in a dull roar, one which I could handle. I slowed my pace down to 6:00 min/km, and tried to keep it more or less steady there.

This went on to the turnaround, and further to about the 10km marker, where it hurt bad enough for me to stop running and walk. At this time, I was being passed by tons of people. I love cheering on others, including the leaders. It keeps me sane on the runs, and gives me something else to think about other than my issues. Soldering on, I passed some Mennonite kids watching me on the front lawn of a farm, as well as Andrew, the husband of one of the ENDURrunners, who sat by the side of the road playing banjo. He gave me a hearty “Go Paul Go!” which was great!

With 1km to go, I did my last little walk to stretch and ease up on the knee, then motored it in, finishing in a time of 1:30:39, which ends up being a 6:02 min/km pace. I was very surprised, as I figured I’d be way slower than that (I was slower yesterday). One more stage down! Time to go have some of the excellent food prepared by the volunteers (did I mention that you will NOT EVER be fed better than you are at this event? I had crepes; CREPES! for my post-race food!) and head to the pool for a swim to cool off. Later tonight is movie night at Hotel Laurier, with a 7pm showing of Monty Python and the Holy Grail. NI!