My final race of the year was the Boxing Day 10 Miler. This will be the 6th time I’ve run this race. It’s become a tradition with the group of runners I train with, the Flying Fartleks. For me, it’s also a way to burn off some of the turkey and chocolate and beer I’ve consumed over the previous two days.

Personally, I love running this race. The distance is perfect; not too long, and not too short. The start time is 12:00pm which is very civilised for a run the day after Christmas. The route is challenging enough, but not too hard. The weather is usually cold, but not frigid. It’s relatively cheap to run ($60) and the swag is usually something interesting. In past years, we’ve gotten mitts, toques, fleece sweater, shell, and t-shirts. At one time they printed shirts with every participant listed on the back. It’s also one of the oldest races around, this year being the 93rd year of the race. It was also featured in the movie Saint Ralph. You can find more info on the race at boxingdayrun.ca.

This year, only 3 of us made the trek to the Hammer (Hamilton) for the run. Most noticeably I missed my friend Jim Simpson, who passed away this past October after a long battle with cancer. The two of us had run the race together several times, and he’s pulled me through a few of them that were tougher than they should have been.

The swag this year was supposed to be lounge pants (or apres-run pants). I was really looking forward to them. But the race had a problem with the supplier and they weren’t able to deliver them on time. They were giving out t-shirts as an alternative, but even those sold out quickly. All they had left was XL, and it’s like a tent on me. Ah well, no big deal. I come to run, not for the swag.

My race plan was to just have a good run. I knew it wouldn’t be stellar. My races this year have all been lousy. I also know that it’s due to my inconsistent training schedule. I was here for the company, the scenery, and to get out and participate in the event. Still, I would be lying if I didn’t feel lousy for signing up for a race with better expectations, and falling short.

The race course, which had been the same the 5 previous times, was changed this year. Gone was the big hill climb into the golf course, as was the long wood-chip rail trail down to the finish. Instead, the course was a sort of out and back, finishing in the underground parking garage / receiving dock of the mall. To make up for it, we ran around the harbour front park a bit more. The race started off as it always does, with me feeling like crap. You’d think I would have learned by now to do a warm-up run before starting, but no. So my warm-up was in race, and I was struggling. My friends quickly left me in their dust (or slush), and I was running alone. No big deal. The weather was decent, which temperatures between -5 and 0 degrees Celsius (23 - 32 degrees Fahrenheit for my American friends).

After about 5km I was warmed up and started getting into a bit of a groove. I took my first walk break at around the 7.5km (5 mile) mark, at the first water station. This was right before we started the uphill section. I got about half way up the hill and had to take another walk. Not a surprise, knowing how out-of-shape I am. The route back down the hill was nice (going downhill is always nice), but now the wind was full force in my face. I took two more walk breaks (at 12.5 and 14km), then pushed through to the finish. Final time, 1:33:56, which is just under 6:00 min/km pace (9:40 min/mile). 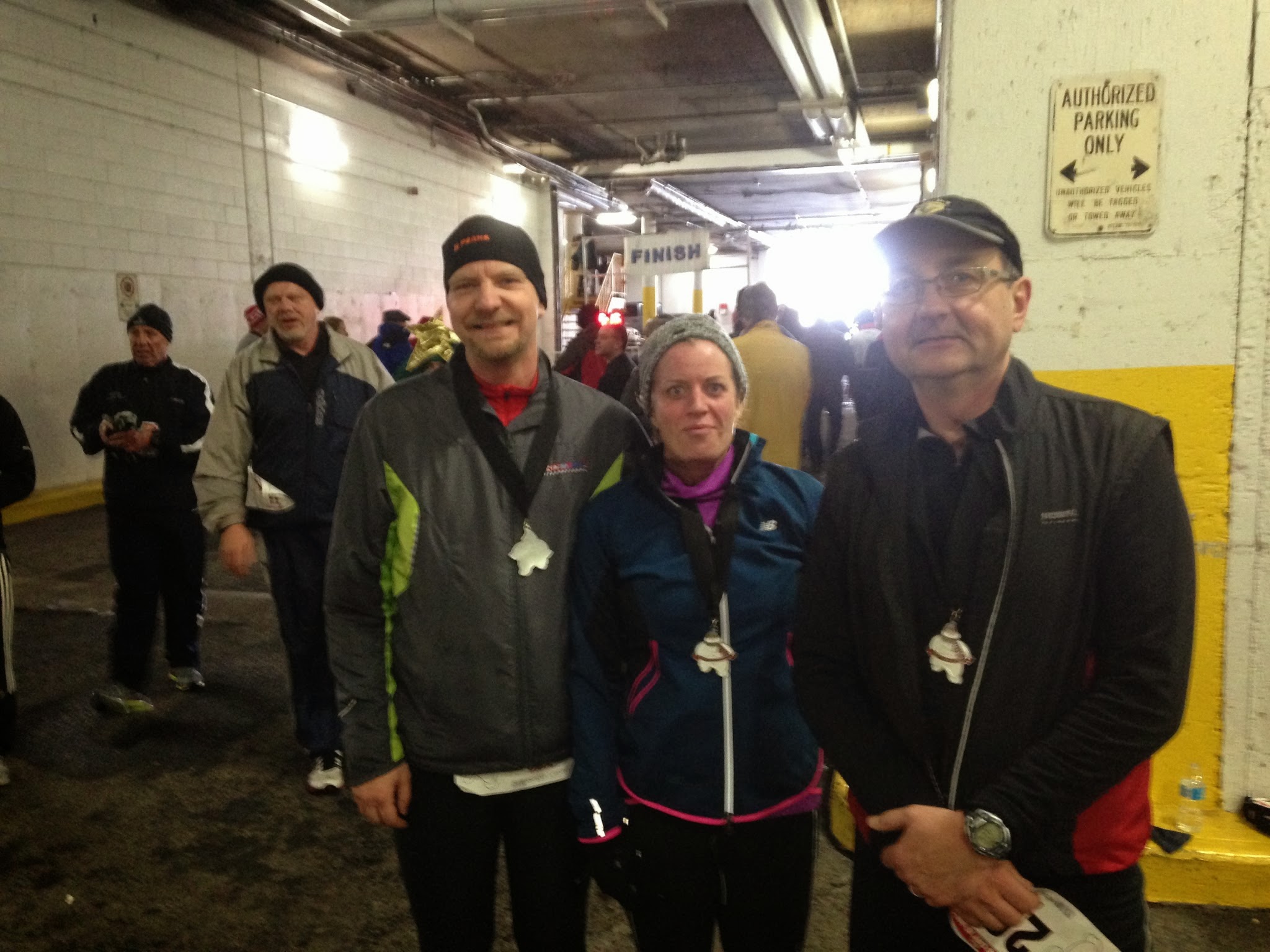 The Flying Fartleks at the finish. You can see the finish line in the background.

Overall I was pleased with the race. While the time wasn’t my best and it was a considerable effort for me, it was great to get out with friends and go for a run.