It is very hard to understand in the beginning that the whole idea is not to beat the other runners. Eventually you learn that the competition is against the little voice inside you that wants to quit. - Dr. George Sheehan

At first glance, Stage 2 looks to be the second easiest of all the stages. It’s the second shortest distance, for sure. But that’s where the “easy” part of it ends. The race starts with a 1km “warm-up” lap around Riverside Park, then a 2km climb first up a steep hill (approximately 30m vertical), then an overpass over the 401. Next are some rolling paved roads, an out and back trail, and finally running back to the start. All this is hard enough, but now add the 34 degree (with the humidity) weather, and the fact that a mere 24 hours ago was the half marathon (21.1km) and you quickly realize that there is nothing easy about this stage.

The other interesting aspect of this race, is that it is a time trial. Runners are ranked according to yesterday’s times, and start in reverse order, 1 minute apart. It gives you a chance to see your “competition” and overtake them, as well as see some of the faster runners that you would normally not see during the race.

My legs were stiff and a bit sore this morning when I woke up. I’d lost a bit of the “high” I had yesterday with my finish at the half marathon; it didn’t bode well. I knew what I was in sore for, having done it twice before, but it was the first hill that really worried me. I’d never run up the whole thing. Ever. Not even in 2009, my best year. My goal for today was much the same as yesterday; pick a doable pace, stick to it for the whole thing, and run up the hill without stopping. The question was, could I do it on tired and largely untrained legs? 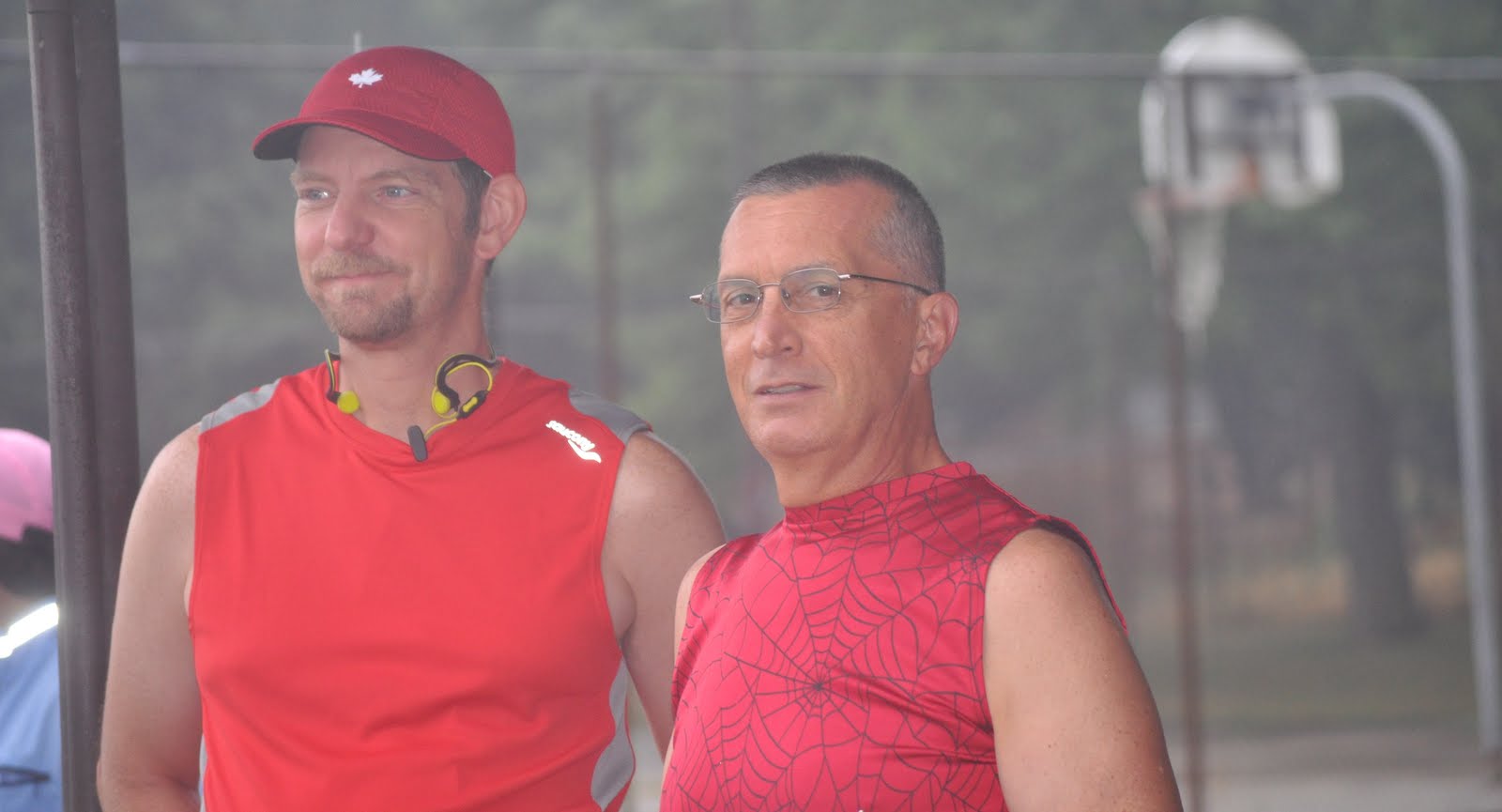 Me and Duff, my “competition”

I’d felt so good about yesterday’s race that I gave in to the “trash talking” that my roommate Duff started. I had about a minute lead on him in the standings, and he said he was gunning for me. I don’t typically compete with people in this (or any) event; it’s just me against myself, or my previous times. But after a few beers in the hot tub, I was all gung-ho in competing.

Lloyd (the race director) did his pre-race roll call, then started us on our way. I was probably the 6th or 7th to start, right after Duff. I fell into my nice easy 5:30min/km pace early, and trotted around the park. Then came the hill. I remembered what my friend Kathleen had told me last night; stay light on your feet as if you were running over hot coals, short strides, and not to power up. Head down, I started up. My legs were protesting, but not too badly, so I kept going. I looked up at one point, and was more than half way up, still chugging. Head down again, I soldiered on, and before I knew it, the hill was over, and I had run the whole thing! Not fast, mind you, but there was no walking. I continued over the 401 overpass, and also didn’t walk. Yahoo! I could see Duff up in the distance, and started to slowly reel him in.

The long road stretches were very tough, because they were very gradual uphill running, out in the open, with no relief from the sun. The first part was shaded by clouds, but it soon opened up and started beating down on me. I also find the long straight road stretches to be mentally tough; looking down the road for 1 or 2km and not being able to see the next water station or turnaround made me think the run was going to be endless.

I stuck to the plan of only walking through the water stations right up to the 8km mark, where the run turned into the trail. At that point, the fatigue really started to get to me, and I took my first walk break. Only 30 seconds, but still, I gave in. I took another one at the turnaround point. The grass we were running on seemed to sap what little strength I had. Soon I was back into the trail and shade, and I picked it up. I could no longer see Duff, and knew I’d lost this stage to him.

It was great to see all the “elite” runners passing by, either on the out and back, or coming up from behind, and wishing them well. Watching them run is amazing; they make it look so effortless, although I know what kind of training it must take to get into such good shape. Everyone is also super-friendly and willing to return the good cheer or high-five you on the route. It’s what makes this event so special; the friendships and camaraderie that develops.

The last 3km was on road with a small trail portion stuck in for good measure. At this point I was willing the legs to keep going, not to give up. I took another small walk break around the 14km mark, just to wipe sweat from my head, and refocus for the last km. Finally, I could see the finish, and the race was done!

Another highlight of the ENDURrun is the fantastic food prepared by the volunteers, and today was no exception. On the menu was submarine sandwiches, Mexican wraps, with salad, and lots of vegetables and fruit to go with it. It’s all you can eat, and man, did I eat a lot!

After the results were read out (and yes, I slipped a few places down in the standings), we headed over to a volunteer’s house who graciously opened her pool to the runners to cool off in. The turnout was great, and it was nice to hang out with these amazing runners and people.

Today’s stage is dedicated to my friend Kathleen, for always being supportive and giving me advice on how to tackle the hill. She’s also responsible for starting me on my running career all those years ago. Thanks for everything!

NEXT UP: The dreaded 30km trail run, which consists of 6 loops of 5km of trails and hills. This race is one of the toughest I’d ever run, especially mentally. I hope I get enough rest tonight so my legs will survive.